For a while now, I’ve been wanting to learn how to build and develop mobile applications on Android, I made a start using Appcelerators Titanium, but not long after during a press conference, a certain fruit seller announce his phone was banning apps developed using 3rd party tools. While this didn’t affect me directly, as I have no interest in the iPhone or developing for it, this news meant that the future of Titanium has been thrown into doubt and I don’t want to learn and start developing with a product that may not be around in a years time.

With this in mind, this last week or so I have been dipping my toes into the wonderful world of native Android development.I have gone for the setup advised in the SDK documentation, Eclipse with the ADT plugin. Quickly passing over the Hello World app, as a developer its a task I must complete before doing anything else, I started on my first application. I decided that for my first attempt I would stick to something I know and rebuild a web based tool I help develop for a well known Manchester server hosting company.

Its been a long time since I last did anything in Java so was a little rusty, but after a few lunchtimes and couple of late nights I have managed to cobble together something that resembles and could just about pass for an Android Application.

So what is it you ask, this wonderful app you have been building up (wont shut up about if you follow me on twitter)? Well I can now tell you, its a speedtest. Not for how fast your mobile connects to the internet, I’ll leave that to the guys at speedtest.net, but to test the speed your website can deliver files to your visitors, now I cant provide you with a link to download and install it as its not really finished and as its not an officially sanctioned app, but I can show a couple of screen-shots from the current alpha version. 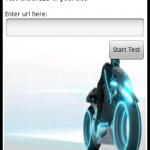 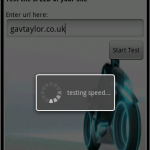 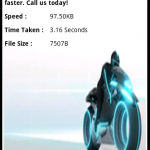 This is probably as far as this application goes, unless the boss asks me to continue with it, as although its quite basic and there isn’t all that much to it, it has served its purpose and helped me to figure out how an application should work, its activity life-cycle and how to correctly put one together.

The next step is to think of that award winning, must have, how did we live without it idea that will make me millionaire… any suggestions?

This entry was posted by Gavin on Sunday, May 2nd, 2010 at 10:53 am and is filed under Android, Google, Tools of the Trade.
You can follow any responses to this entry through the RSS 2.0 feed.

Enough of me, let me know your thoughts below... Cancel reply